There seems to be two women who know all about advertisers products and services, experts with insider information, living in every corner of the globe. They quite often hold their enlightened conversations on a bus. Here in Kenya they spend all of their life on a matatu, a minibus public transport vehicle, discussing the various features of the client’s business. Miraculously, and without reference to a notepad, iPad or mobile phone, they can recall the client’s phone number. When I travel on a matatu I usually have my eyes closed and just think about whether my medical insurance is up to date. Hey what a great idea for a commercial!

I have no problem with the scenario. Yes it is hackneyed, clichéd, over done, badly done and people just don’t talk to each other like that… but there’s more to it. Often this idea comes from a client who has thought more about “having an idea” for his or her radio commercial, than actually thinking about the brief. From the piece of paper in front of me I have a list of features that I have to turn into benefits and then shoehorn into the scenario. I have to get my two ladies to say things that two ordinary people just would not say to each other. I end up with a bad commercial, and a commercial that sounds like the hundreds of other bad commercials done in the same way because the client had this “great idea”.

How do you avoid falling into this trap? Have a great idea that comes out of a simple brief. What does the client want listeners to DO? Why should they do it? Who are we talking to? If the brief is good and simple, it’s easy to find creative ways to communicate it.

Maybe we should champion “Realistic women talking on a bus”!

Woman 1: What did you say their number was again?
Woman 2: I didn’t … but I have it here on my Blackberry… hang on a second…. Oh sod it… the battery’s nearly dead. Look can I email it to you later?
Woman 1: Naaar, I’ll just get Mike to Google it.
Woman 2: You know they were founded in 1979?
Woman 1: That’s exactly the kind of useless information I’d expect you to come up with. 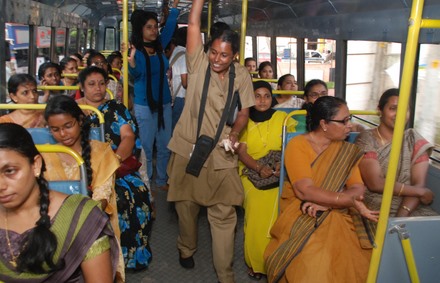 3 thoughts on “Two Women on a Bus”